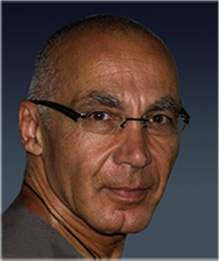 Since you looked up this page, I assume you are at least mildly interested to find out who I am.
I grew up in an era and a place where the creation in any artistic endeavor was expected to speak for itself and for its creator. Although these days 'speaking' about oneself (usually in 3rd person), touting one’s degrees, awards, collections one's works are in, had became the norm, I believe that if you are able to perceive the artwork in an unconditioned state of presence, you will KNOW more of the true identity of the artist, than words can ever convey.
But if you absolutely want to know the facts, here they are: in this lifetime, I was born Hungarian in Transylvania, to parents of Austrian/Jewish/Armenian/Hungarian descent. I studied engineering/design for 2 years in University, before escaping communism to find freedom and pursue my passion for sculpture. I lived in a refugee camp in Italy for 7 months before immigrating to Sweden. After two and half years there, I moved to Canada where I became a sculptor, photographer, designer, and home builder. The latter, was a means to support myself in the early years until I was able to turn professional. I relocated to Northern California in 2001 and live and work on a peaceful and secluded 10 acres in the foothills of the Sierra-Nevada mountains.
Craft, design, architecture and sculpture have been important in many of my past lives. This time around my calling is to find and express deeper beauty that exists beyond the surface reality of form.